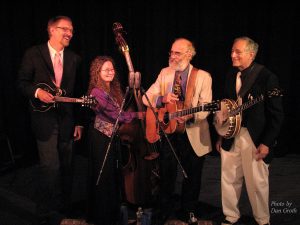 If you don’t see the box above to purchase advance tickets, click here to buy on EventBrite.
Tickets at door: $20

Southern Rail’s performances are high-energy exuberant fun, with riveting harmonies, irrepressible humor and sparkling banjo and mandolin solo work. The group’s reverence for the traditional shines throughout their live concerts and recordings, and is reflected in their prolific songwriting.

Southern Rail celebrates over 3 decades of performing with the long awaited release of “On the Road From Appomattox”. The new CD has gotten rave reviews for the group’s powerful song-writing and prodigious harmonies.

Southern Rail’s recordings have climbed to #11 on Bluegrass Unlimited’s Top Thirty Single’s Chart, and have hit #1 on a number of radio stations across the nation. Their songs have graced Bluegrass Unlimited’s Top Thirty Singles Chart for a combined total of 32 months, receiving heavy national airplay. One of Southern Rail’s earlier CD’s, a special Bluegrass Gospel compilation entitled Glory Train, was nominated for Best Gospel Recording of the Year by the International Bluegrass Music Association. Southern Rail has been selected by the New England Foundation for the Arts to be included in their prestigious Touring Roster.

John Tibert (Northboro, MA) Mandolin and Harmony Vocals. John started playing guitar at age 14. But once he heard Dave Grisman on”Old and in the Way”, his life was never the same. He’s been addicted to bluegrass ever since.He’s a prolific songwriter and also has taught mandolin for over a decade. John’s mandolin playing isfluid, lyrical and from the heart, and his superb bass vocals are a powerful addition to the group’ssignature quartet harmonies.