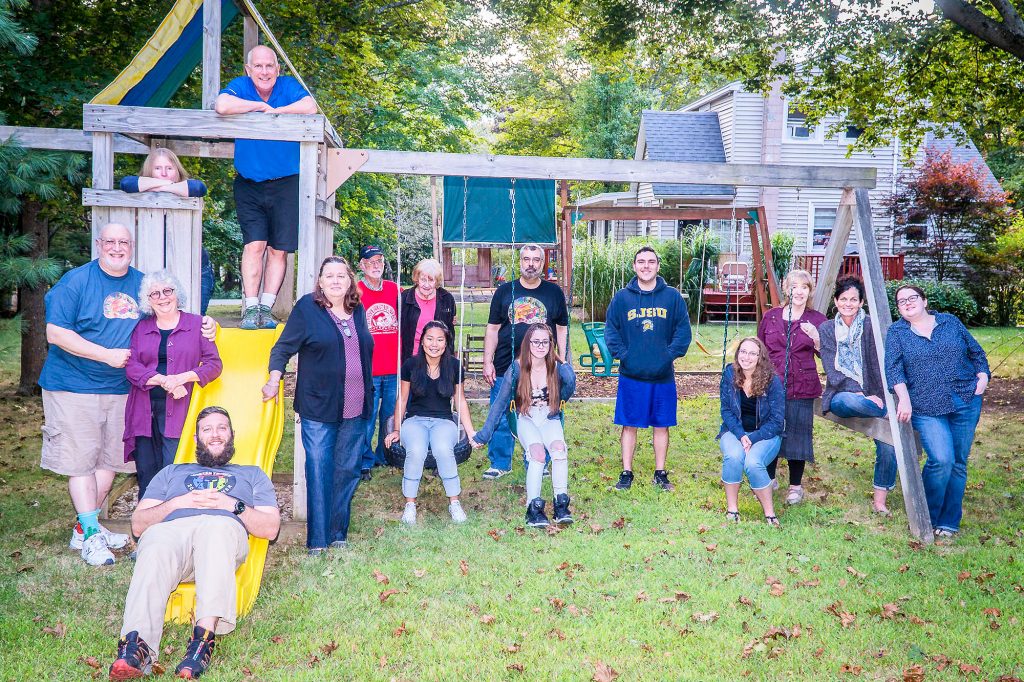 Our volunteers include musicians, writers, artists, school teachers, ad executives, computer whizzes, and just plain lovers of folk music. Many have been with us since our first coffeehouse in March 1989. Why do they stay? Probably because they all love the music and using their talents to present the highest quality shows they can.

The Rose Garden Coffeehouse is an all-volunteer non-profit 501(C)(3) corporation with a mission is to present high-quality music performers at a reasonable price in a comfortable, intimate setting. Presenting both national and local musicians, it was founded in 1989 and continues currently at the Congregational Church, Mansfield, MA. The organization services both the audience and the independent musicians by providing a venue that allows the talented and hardworking musicians to bring their fine craft to an appreciative audience.

Twenty years ago, Sam and Rae Ann McLanahan and a half-dozen volunteers took a flyer on hosting a monthly folk music coffeehouse at St. Mary’s Church in Mansfield.

Held in a building called the “Rose Garden” by the parish, the Rose Garden Coffeehouse became not only a haven for those who savored folk and acoustic music but a favorite among nationally renowned artists as well. This season the Rose Garden and its all-volunteer staff will be celebrating two decades of presenting top-level musical talent ranging from Garnet Rodgers to up-and-comers Antje Duvekot and Red Molly.

In February, the coffeehouse is planning a special anniversary show charting the influence of songwriting legends Woody Guthrie and Pete Seeger and featuring the Boston Globe’s Scott Alarik and contemporary touring star Alistair Moock. The show marks a satisfying milestone for the McLanahans and about a dozen volunteers who serve up music along with coffee and desserts each month in a local church hall.

“It all started in the spring of 1989 when we were asked to organize a show for the Knights of Columbus,” says Sam McLanahan, affectionately known throughout the local music community as “Mac.” “We asked Ronnie Goddard, who was a local musician we knew, to play and we were pleased to get an enthusiastic response.”

The Rose Garden officially opened as a monthly series that fall and quickly built a following and a dedicated corps of volunteers – many of whom are still with the Rose Garden today.

After a year, the Rose Garden outgrew its home in the parish building and moved to new quarters in the Orthodox Congregational Church on West Street. Guests have ranged from talented but unknown troubadours to celebrated national acts like Bill Staines, The Kennedys and Cheryl Wheeler.

The Rose Garden has also nurtured many emerging artists who have gone on to make big impressions on the national folk music circuit. The appealing Antje Duvekot, who returns for her third visit to the Rose Garden this year as a headliner, got one of her early opening slots for a concert at the Rose Garden.

The coffeehouse has also helped to ignite the careers of aspiring singer-songwriters through its highly-regarded annual singer songwriter competition, which regularly garners entries from as far away as Texas and California.

The Rose Garden has also provided showcases for local talent, and this year will welcome back former Mansfield residents Leslie Lee and Steve Gretz for the release of their new CD “Better Off Someday.” The Gretzes, local coffeehouse pioneers as well as distinguished performers in the gospel and traditional music field, now live in Rochester, N.Y.

While better known in their role as promoters of folk and acoustic music, the McLanahans have also enjoyed playing and singing for years with fellow volunteers in a homegrown group called the Nashville Clippers.

More information about the Rose Garden Coffeehouse and tickets is available online at www.rosegardenfolk.com.