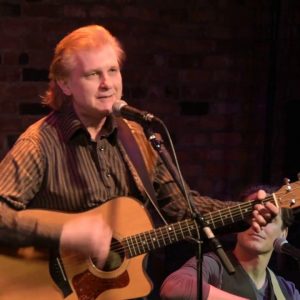 Peter Calo, who last season played with Matt Marshak at the Rose Garden, returns for a solo set!

Peter Calo, who last season played with Matt Marshak at the Rose Garden, returns for a solo set!

Calo has produced many recordings, including Carly Simon’s release, “Never Been Gone” and is featured in the documentary, “All You Need is Klaus”. He was guitarist for Showtime’s “Ray Donovan” and for the Tony and Grammy Award-winning original Broadway and film production of “Hairspray”.

Peter played to a sold out Carnegie hall as part of the” Lead Belly Tribute”, performing with Eric Burton (The Animals), Edgar Winter, Kenny Wayne Sheppard, Walter Trout and others.

In 2018 Peter was the Musical director for the PBS Special “Jimmy Webb Live from The Kate” which also featured Ashley Campbell, the daughter of legend Glen Campbell.

Peter has just finished scoring the film “Extra Innings” directed by Albert Dubah. He will be releasing his 2nd solo acoustic guitar album in 2019. Peter continues to perform his own works as well as teaming up others.

Peter is Currently performing in “Axiel Himalo’s Christmas Fish Tale” at the Schoolhouse Theater. Peter composed the music and is performing the music.