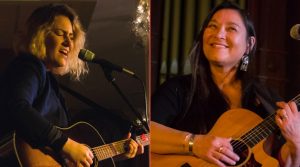 We’re excited to have Kirsten Maxwell return to the Rose Garden! In 2016, she made quite an impression. Her crystalline vocals, ebullient stage persona and original and cover songs left us wanting more. Adding to the show will be Kim Moberg, the winner of our 26th annual Performing Songwriter Competition, chosen in May 2018, who will play a split with Kirsten.

Kirsten Maxwell performs at the Rose Garden Coffeehouse in 2016. Photo by Aaron Tavares.

Kirsten Maxwell, a Long Island performer now based in Nashville, is known for her crystalline voice and fine guitar playing. She returns to Mansfield on the heels of a recently released self-titled EP. Though her voice is often compared to that of Joan Baez, Judy Collins or Joni Mitchell, her latest is a contemporary folk release with passionate, touching songs that will leave you wanting more.

“I never thought I’d ever hear a voice as angelic and mesmerizing as I did when I first started listening to Joan Baez some 50 years ago, but then I heard the voice, the songs and melodies of Kirsten Maxwell,” says Jon Stein, host of Hootenanny Café on WTBQ.

Maxwell, who last opened at the Rose Garden in 2016, returns with a full set for her Feb. 23 show.

She has toured extensively over the past 4 years, and she’s shared stages with Melissa Etheridge, Ferron, and Karla Bonoff. Most recently, Maxwell performed a solo show at The Cutting Room in New York, accompanied by Paul Shaffer.

In a review of her EP, John Apice of No Depression writes, “Her voice alone wraps itself around your ears … this is an artist still in the making and not just a singer.”

John Platt, of WFUV-FM, writes of her EP, that Maxwell “spreads her wings to embrace not only folk, but Americana, pop, and indie influences. The journey has just begun.” 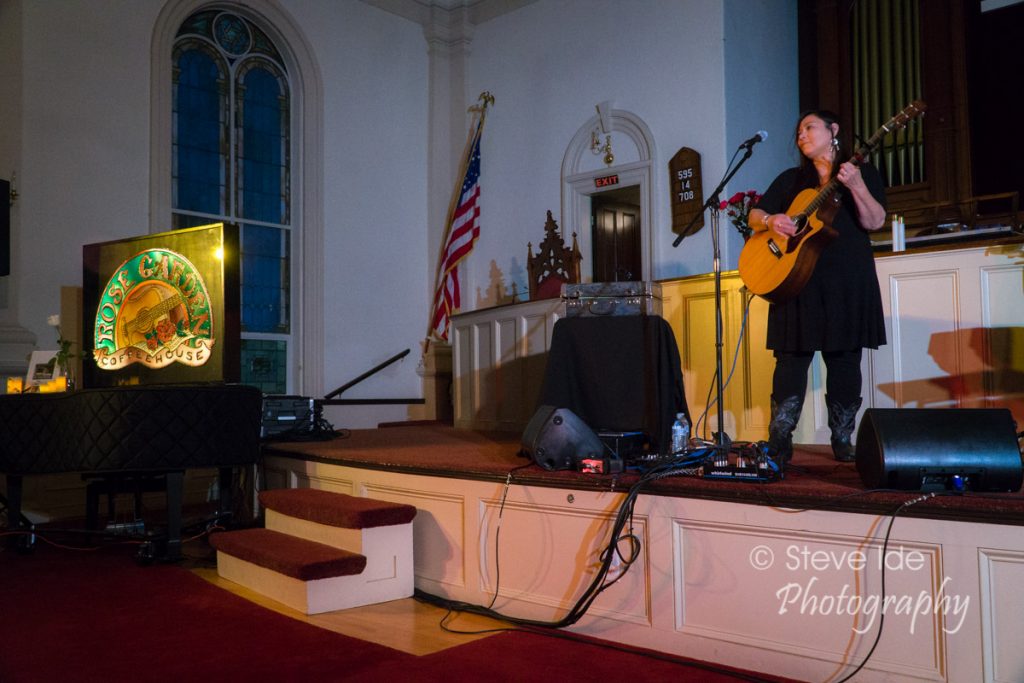 Kim Moberg performs as a finalist during the 2018 Performing Songwriter Competition at the Rose Garden Coffeehouse in Mansfield, Mass., on Saturday, May 19, 2018. Moberg was chosen as the winner by the Rose Garden judges. Photo © Copyright 2018 Stephen Ide

Kim Moberg, a wonderful singer and guitarist, was the clear winner at the 26th annual Performing Songwriter Competition at the Rose Garden last May.

Moberg, a member of the Rhode Island Songwriters Association who lives on Cape Cod, impressed the judges with two of her songs, one of a sinner-and-saint world and the other about a strong woman from her ancestry.

One of her songs, “Here Be Dragons” was the result of the songwriters’ event in which participants were asked to pen songs on provided topics. Moberg will be performing that song and her other contest entry at the upcoming show.

Kim’s passionate and heartfelt vocals mesmerize listeners while her compositions tug at feelings of melancholy, heartbreak, healing and social consciousness.

“Be it instrumental or vocal, there’s a haunting quality to Kim Moberg’s music,” says journalist Joe Burns. “Melancholic melodies and stories of separation and reunion are Moberg’s songwriting staples, and mark her as an upcoming artist.”

Performing a full set at the Rose Garden is part of her prize for winning the competition, along with a cash prize. But Moberg — who was born in Juneau, Alaska, and is the daughter of a classical pianist mother of Alaskan Native Tlingit descent and a US Coast Guard veteran father from Kansas — was on her way to national recognition long before she graced the stage in Mansfield.

Moberg’s debut CD, “Above Ground,” celebrates the achievement of her goal to bring her music out of the basement. Produced by Grammy nominated producer Jon Evans, it was released worldwide in September 2017.