and the finals of our Performing Songwriter Competition 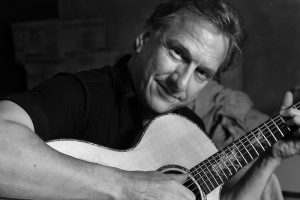 A 15-time winner of the Boston Music Awards, Ellis Paul is a transformative songwriter whose shows are just mesmerizing. He last played at the Rose Garden in 2001. It’s a thrill to have him back. “Despite his success and sense of history, Mr. Paul remains an artist with his eye on the future and an interest in discovering the transformative potential in his music.” – The New York Times  Also this night will feature the finals of our 26th Performing Songwriter Competition. Check out our three finalists!

Some artists document their lives through their music. Others chronicle their times. It’s a rare artist who can do both, telling their own story through songs that also encapsulate the essence of people and places who have helped define their era overall. Woody Guthrie comes to mind, and so does Bob Dylan. Bruce Springsteen certainly as well. Yet few others, for whatever genius they may possess, can relate their own history to the history experienced by those who find that common bond, be it in a coming of age, living through the same realities or sharing similar experiences.

Ellis Paul is one of those gifted singer/songwriters. Though some may refer to him as a folksinger, he is more, for lack of a better word, a singular storyteller, a musician whose words reach out from inside and yet also express the feelings, thoughts and sensibilities that most people can relate to in one way or another, regardless of age or upbringing. The exhilaration of the open road. A ​celebration of heroes.​ ​The hope for redemption. Descriptions of those things that are both near and dear. The sharing of love…, intimate, passionate and enduring.

These are the scenarios that emerge from Ellis Paul’s new album, Chasing Beauty, a set of songs which detail, in typical Paul fashion, stories of people and places that reflect larger truths about us all. “Kick Out the Lights (Johnny Cash)” pays tribute to that fearless American icon name-checked in its title. “Plastic Soldier” offers homage to a wounded soldier returning from Afghanistan. A real-life barnstorming pilot takes the spotlight in “Jimmie Angel’s Flying Circus,” while iconic Boston blue collar musician Dennis Brennan takes the focus in “Waiting on a Break.” Even the Empire State Building and the Boston Red Sox get their due, via “Empire State” and “UK Girl (Boston Calling),” respectively.

In reality, these stories are a continuation of tales Paul has told for more than a quarter century, over the expanse of nineteen albums, numerous critical kudos (15 Boston Music Awards alone), inclusion in several movie soundtracks, and stages he’s headlined both near and far. “I’ve got a car with over 4​75​,000 miles on it, and it’s my third road vehicle,​” Paul declares. “I’ve been doing 200 shows a year for over twenty years. There isn’t a town in the country where I won’t find a friend. I’m a nomad. And I’m gonna write and play until I’m gone.”

No doubt he will. Still, it’s somewhat ironic that Paul gravitated towards this bigger world of intent and expression given that the place Paul considers his hometown these days isn’t New York or Nashville, or Boston or Austin or ​Charlottesville, VA. where he lives, but rather Presque Isle, Maine, a tiny enclave surrounded by three rivers. Not surprisingly, the name translates to “almost an island.” Presque Isle shares a vanishing tradition with many small towns these days, where family farms are giving way to industrializ​ation​ ​and giant corporations, and earning a livelihood from the land is no longer the simple option it once was. Nevertheless, it’s still a haven for traditional values and for people as real and authentic as the soil they once tilled. If there’s one grace left to cling to, it’s the grace of nature’s beauty, sealed off by the surrounding mountains and fields.

Working as a teacher and social worker with inner city children by day and pursuing the possibilities offered by Boston’s fertile music scene at night, he gained prominence in local coffeehouses and open mic nights early in his career. It was the same circuit that opened the door for other like-minded artists of the day, and in turn, gave Paul exposure to such creative contemporaries as Shawn Colvin, Dar Williams, Patty Larkin, John Gorka, Catie Curtis, and Bill Morrissey. It also helped him win a Boston Underground Songwriting competition and placement on a Windham Hill Records singer/songwriter compilation, bringing him his first hint of national exposure at the same time.

The major tipping point in his career came with the opportunity to open for Bill Morrissey, one of New England’s most prominent folk artists. Paul would repeatedly ask Morrissey about his own influences and seek his advice on who he ought to listen to. “You know, that’s a very smart thing to do,” Morrissey muses. “It helped set him apart. A lot of young singers I meet are not curious about what went on before; they just say, ‘I want to sing another song about my life.’ Paul has a sense of roots, of connectedness to the whole history of folk music; he sees the thread that runs through all the generations of this music.”