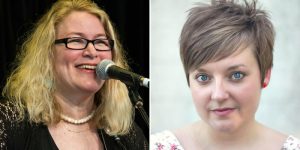 Susan Cattaneo is one of Boston’s most respected songwriters. A powerful singer and sophisticated writer, Susan combines vivid storytelling with a modern songwriter’s spin. Respectful of tradition, but not bound by it, Susan blends rock, folk and blues with a healthy dose of country. Call it New England Americana with a twang. Abbye West Pates, the winner of our 2017 Performing Songwriter Competition, is a songwriter and storyteller based in Memphis, Tenn. Born and raised in southern Mississippi, she was inspired by folk/Americana artists like Patty Griffin and authors like Wendell Berry.

Susan Cattaneo is one of Boston’s most respected songwriters. A powerful singer and sophisticated writer, Susan combines vivid storytelling with a modern songwriter’s spin. Respectful of tradition, but not bound by it, Susan blends rock, folk and blues with a healthy dose of country. Call it New England Americana with a twang.

Susan’s latest album, Haunted Heart was released in January 2014 to national acclaim. It was voted one of Alternate Root’s Top 100 Albums of the Year, and won Album of the Year at the Limelight Music Awards.

In 2016, Susan was an Emerging Artist at Falcon Ridge Festival and performed as a finalist at the Philadelphia Songwriters Project and at the Wildflower Festival Songwriters contest. Over the past two years, she has also been a finalist or winner at some of the country’s most prestigious songwriting and music contests: Kerrville’s New Folk Contest, the International Acoustic Music Awards, the Independent Music Awards, the 5 Unsigned Only Song Contest, the USA Songwriting Competition, the Mountain Stage New Song Contest, the Mid-Atlantic Song Contest.

In addition to being a solo performing artist, Susan has been teaching songwriting at the Berklee College of Music for over 10 years, and has also recently joined the Western Mass trio The Boxcar Lilies.

In the New England area, Susan has won over audiences at venues such as: Club Passim, the Shalin Liu Center, the Me & Thee Coffeehouse, Tupelo Music Hall, the South Shore Music Circus and the River Club Music Hall.

Abbye West Pates is a songwriter and storyteller based in Memphis, TN. Born and raised in southern Mississippi and inspired by folk/Americana artists like Patty Griffin and authors like Wendell Berry, Abbye tells stories that locate you in a particular place with a particular people. She explores life’s real struggles – addiction, grief, anxiety – reminding us of grace and faith and forgiveness in the midst of it all.

Abbye performs during our Performing Songwriter Competition in May 2017

Abbye’s first studio album, Leaving the Shadows (2012), reflects on the small town that raised her and the city that’s grown her up. “Mr. Cooley,” a fan favorite from the album, looks back on her hometown and what she may have missed while “Memphis Song” highlights the choice to put down roots in a sometimes difficult place even when it seems easier to start over again.

Her newest release, Miles of Green (2016), shows us a growing songwriter as Abbye becomes more at home in her sound and vocal style. She continues to draw on her southern heritage, bringing us along on a trip through the Mississippi Delta on “Take Me With You.” Abbye likes to explore what one person is thinking and feeling as she does with the characters in “Lonely Guy” and “Stairs,” asking “Why did you choose that path? Am I really any different than you? How could things be different?”

“I am constantly analyzing people, including myself, and I want to know what’s really going on, what’s happening down deep inside of us,” Abbye says. “It’s the stuff going on below the surface that I’m interested in writing about.”

Abbye lives with her husband and music-companion, Jeff, who accompanies her on percussion when he can. She’s also an urban gardener, handwritten letter writer and pour over coffee drinker.