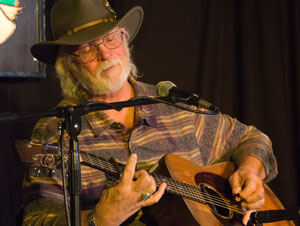 After touring and playing concerts for over four decades, you would think that musician and songwriter Bill Staines might think about slowing down, but that’s just not the case. Staines continues to perform more than 175 shows a year and drives close to 70,000 miles getting to them. He is one of the most durable and beloved singers on the folk music scene today, and he is returning to the Rose Garden for this special show. 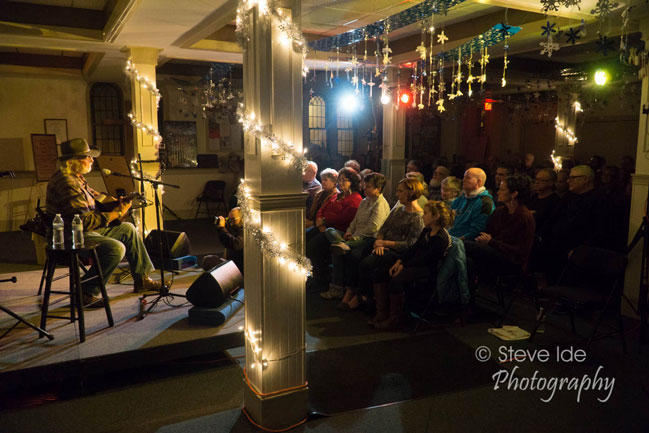 Bill Staines performs at the Rose Garden Coffeehouse in 2016. Photo by Stephen Ide

Bill Staines has twenty-six recordings to his credit and has written over 300 songs, many of which have been recorded by the likes of Peter, Paul, and Mary, Makem and Clancy, Nanci Griffith, Glen Yarborough, and Jerry Jeff Walker. His music is sung at campfires and folk music gatherings, in homes and churches, all around the country. Songs like “All God’s Critters,” “The Roseville Fair,” “Child of Mine,” and “River,” have become folk music classics. Composer David Amram once described Bill as “a modern day Stephen Foster. His music will be around a hundred years from now.”

On stage, Staines is an intimate, compelling performer, out of the folk scene of the 60’s, encouraging his audience to sing with him on his chorus songs. He will mix in traditional tunes with his own contemporary folk ballads. His humorous tales of life on the road and observations of everyday people provide an entertaining blend of story and song.

“I have always wanted to bring something of value to people with my songs,” Staines says. “I think that is important, to try to write beyond myself, to write to the great things that we all experience in our lives.” For Staines, that is what folk music is all about — a music rich in the human experience and spirit.

Staines has recorded two children’s albums, “The Happy Wanderer” and “One More River,” both of which have won the coveted Parents’ Choice Award. His music has appeared in a number of films, including the HBO series, “Deadwood,” “Return of the Secaucus Seven,” John Sayles’ first endeavor as a director, and “Off and Running,” with Cyndi Lauper.

He has done numerous radio and television appearances and, during its early years, and was a frequent performer on Garrison Keillor’s “A Prairie Home Companion.”

Nanci Griffith once wrote, “Bill Staines has been my hero since 1977. He carries on where Woody left off — carrying on the tradition of stories and characters you wish you knew.”

“When do you think it will be time to retire?” someone once asked Staines. He answered, “In the words of my old friend, Tommy Makem … about ten o’clock tonight.”