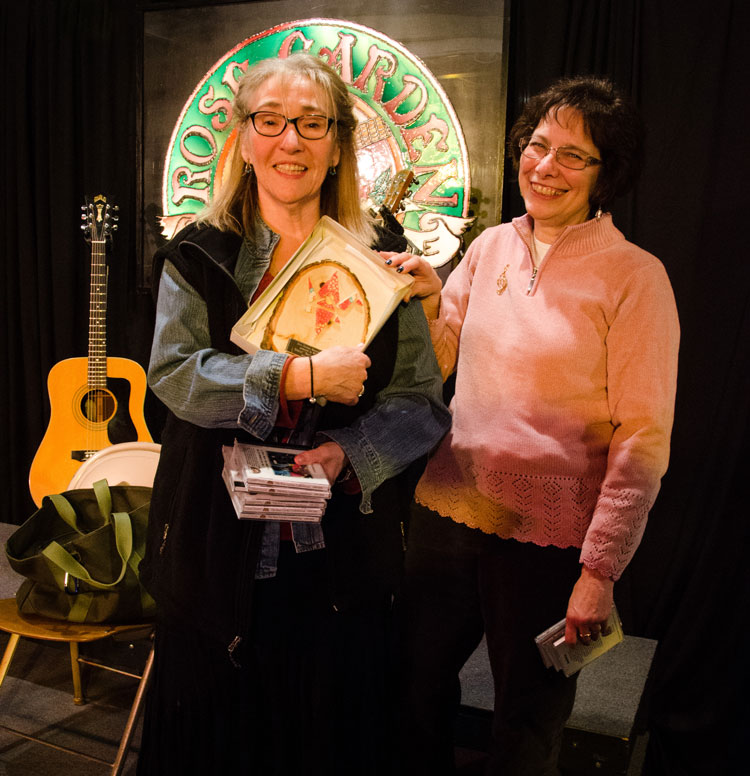 MANSFIELD, Mass, Jan. 17, 2015 — The Boston Area Coffeehouse Association has posthumously awarded Samuel “Mac” McLanahan of North Attleboro with its Jerry Christen Memorial Award for service to the folk community. Liz Freeman of BACHA presented the award, a handmade origami plaque, to McLanahan’s widow, Rae Ann McLanahan of North Attleboro, during the Rose Garden Coffeehouse on Saturday night.
Mac McLanahan, 74, co-founder and artistic director of the Rose Garden Coffeehouse in Mansfield, died on Dec. 4, 2014 of complications from prostate cancer.  He had been chosen to receive the award some time ago, according to Freeman.
“Mac clearly loved this music and worked tirelessly to introduce it to an ever-expanding audience through his own musical groups and the Rose Garden Coffeehouse,” said Freeman. “It has been said that the music he fostered built both friendships and careers.
Read tributes to Mac  |   Read Mac’s obituary
“He was able to build connections and build communities and cooperation between other venues. He was a founding member of the Boston Area Coffeehouse Association and an active board member since it began over 15 years ago. Recently he worked to improve our webpage (http://bostoncoffeehouses.org) and most recent brochures.”
McLanahan served as folk liaison to folk radio station WUMB in Boston for many years and had served as a volunteer on the BACHA stage during the Boston Folk Festival, held at UMass-Boston for several years, she said.
“Performers and most likely all who knew Mac knew he was a kind and generous man, so well well-liked. This award was planned to be presented to him at the January show and we hope he knows how much our BACHA family loved him,” Freeman said.
Several members of BACHA, along with more than 8o people, attended Saturday night’s show of Les Sampou and Marina Evans at the Rose Garden Coffeehouse, 17 West St., Mansfield, Mass., now in its 26th season.
The BACHA award is named for Jerry Christen, who was a driving force behind the creation of BACHA and involved deeply in the region’s folk community. Christen founded the New Song Coffeehouse in Bedford in 1985. He also founded the Bedford Center for the Arts and was president of the Lexington Arts and Crafts Society. He formulated BACHA as a means of fostering folk music in the region, removing the feeling of competitiveness among the many area coffeehouses and helping to unite them by having a Coffeehouse Stage at the Boston Folk Festival.
“The award is made to someone we feel embodies many of the same inspiring qualities Jerry shard with so many of us until his death in 2002,” Freeman said. The first award recipient was Scott Alarik, an award-winning  author, folk singer and former folk music writer for The Boston Globe.
“Mac would be so honored to get this award,” said Mrs. McLanahan. “He just loved everybody in that organization [BACHA] and loved everybody here at the Rose Garden Coffeehouse. He had his Rose Garden vest and other gear with him right down to the end. He did say his prayers that night … and I asked him what he was praying for, and he said he was praying for grace and dignity. You helped answer that prayer with the grace and dignity of this award.”
In thanks, Rae Ann McLanahan gave members of BACHA in attendance a limited-edition mix CD created by Mac of music from the 1999-2000 Rose Garden season called “Fresh Tracks, which featured artists Tom Russell & Katy Moffatt, Bob Franke, T.J. Wheeler, Michael Smith, Barb Phaneuf and others who performed during the Y2K season.